1. How harmful are parasites to my pets?

Harmful. At first your pet my appear and act normal but as the infestation worsens so will the health of your pet. The parasites live in the intestines and feed off of your pets resulting in significant blood and weight loss, weakness and malnutrition, vomiting and diarrhea. Intestinal obstructions could also result. If left untreated your pet could eventually die.

2. How would I know if my pet has parasites?

A few signs to be on the look out for are in your pets stool. Some parasites are visible to the human eye. If your pet has what looks like grains of rice stuck to your pets fur, around the anal area or on the stool it could be tapeworms since they have a tendency to break off in segments. If what looks like spaghetti appears in the stool that could very well be roundworms. Some parasites can only be discovered through the use of a microscope. Thats why we encourage regular fecal examinations so we can make sure your pet remains healthy.

Other signs to be on the look out for are if your pet has loose stool, diarrhea, and weight loss. Your pets fur may begin to look shabby and dull.

With fleas, your pet will do a lot of itching and reddish, brown color dirt will appear on the fur. This color is the result of dried blood from your pet.

Both canines and felines are susceptible to heartworms. Heartworms are contracted through a common host, the mosquito, who deposits heartworm larvae via saliva into the animals bloodstream.

The larvae then continue to develop inside the tissues of their new host until they begin their migration to the heart where they will eventually mature into adult worms.

Fertilized adult female heartworms release microfilariae into the blood stream. Because the microfilarie are so few in number and are present in the bloodstream for a short period of time, it makes detecting their existence difficult. All a mosquito has to do now is bite the heartworm infected host, ingest the microfilariae and move on to another host hence starting the cycle all over again.

One of the most common parasites, hookworms live and grow inside the intestines of canines and felines. Young puppies and kittens can be infected through nursing and can begin passing eggs in their feces in as little as two weeks. The eggs then hatch and release infective larvae. This can occur in as little as 2-8 days under certain conditions.

Canines and felines can become infected with hookworms if they walk across contaminated soil then lick their paws and/or fur later, from contaminated feces or vegetation.

Some pets show no sign of infection, yet some do. Some signs to watch for include vomiting, severe weight loss, loss of appetite, and diarrhea. Heavy infections may be fatal.

Hookworms have the potential of harming people as well. The hookworm larvae will usually move around within the skin. One type of hookworm has the potential to penetrate deeper into tissues which can cause serious damage to organs and intestines.

Another very common parasite, roundworms live inside the small intestines of canines and felines. Young puppies and kittens can be infected before birth and via nursing. Eggs are passed inside the feces and can develop in as little as one week and remain ineffective in the soil for years.

Canines and felines can become infected with roundworms if they walk across contaminated soil then lick their paws and/or fur later, from contaminated feces, vegetation or ineffective larvae in small mammals or birds.

Some pets show no sign of infection, yet some do. Some signs to watch for include vomiting, severe weight loss, loss of appetite, and diarrhea. Heavy infections may be fatal.

Roundworms also have the potential of harming people. Roundworms enter the body as eggs which soon develop into larvae. The larvae can travel through major organs and in most cases, no symptoms exist. In some cases however, the larvae can cause tissue damage which can affect the nerves and the eye, causing permanent eye damage, even blindness.

Whipworms are the hardest parasite to eradicate from a pet. Whipworms are more common in dogs than in cats. Cats can be infected with whipworms, but infection is rare.

Canines can become infected with whipworms through infected feces (which will become infective in one month), soil or vegetation. Whipworms can be quite resilient and the eggs can remain infective for a period of 3-5 years in the soil.

Whipworms live in the intestines and suck blood. Severe infections may lead to diarrhea, weight loss and blood loss.

Rarely are humans infected with whipworms when they are eaten. 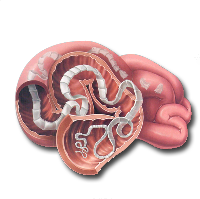 There are two types of tapeworm that can affect canines and felines. The tapeworm is the most common parasite that an owner can actually see. Tapeworms can break off in segments and appear as grains of rice in the stool.

Tapeworm eggs are ingested by an intermediate host such as a rodent or a flea. For example, if a dog feels a flea crawling or biting he may bite and end up swallowing a flea or a cat my catch a mouse and bite it. Its that easy.

The tapeworm will enter the bowels and travel to the vital organs, stealing vital nutrients from the food dogs or cats eat here. Tapeworms can cause intestinal disturbances, abdominal discomfort, nervousness and weight loss.

Giardia is a single-celled parasite which lives in the intestine. Its contagious between canines which typically infects older dogs and puppies resulting in diarrhea, vomiting and weight loss. Left untreated, this parasite can lead to overall poor health condition, even death when serious.

The host would need to swallow water with Giardia present or other substances soiled with feces. To prevent Giardia its important to provide safe, clean drinking water. Allowing your pet to drink standing water outside, such as puddles increases their risk since the water may have been contaminated with animal feces. As with preventing all parasites it is important to pick up feces.

Giardia is the common cause of diarrhea in people, but dog Giardia is not usually considered to spread from animals to humans, but human Giardia may infect dogs.

Unfortunately there is no preventative to prevent a Giardia infection so maintaining a clean yard and frequently changing your pets drinking water is the best way of prevention.

Coccidia is a parasite that is not visible to the naked eye. It comes from bird droppings and dogs and cats can become infected by eating contaminated soil and licking their paws and fur afterwards.

After its swallowed, this parasite damages the lining of the intestine preventing the absorption of nutrients from food. Bloody, watery diarrhea may appear and dehydration may occur due to the amount of water lost.

Its highly contagious among young puppies and kittens and unfortunately there are no preventatives to help protect against Coccidia. There is only treatment with medication available to keep the parasite from multiplying.